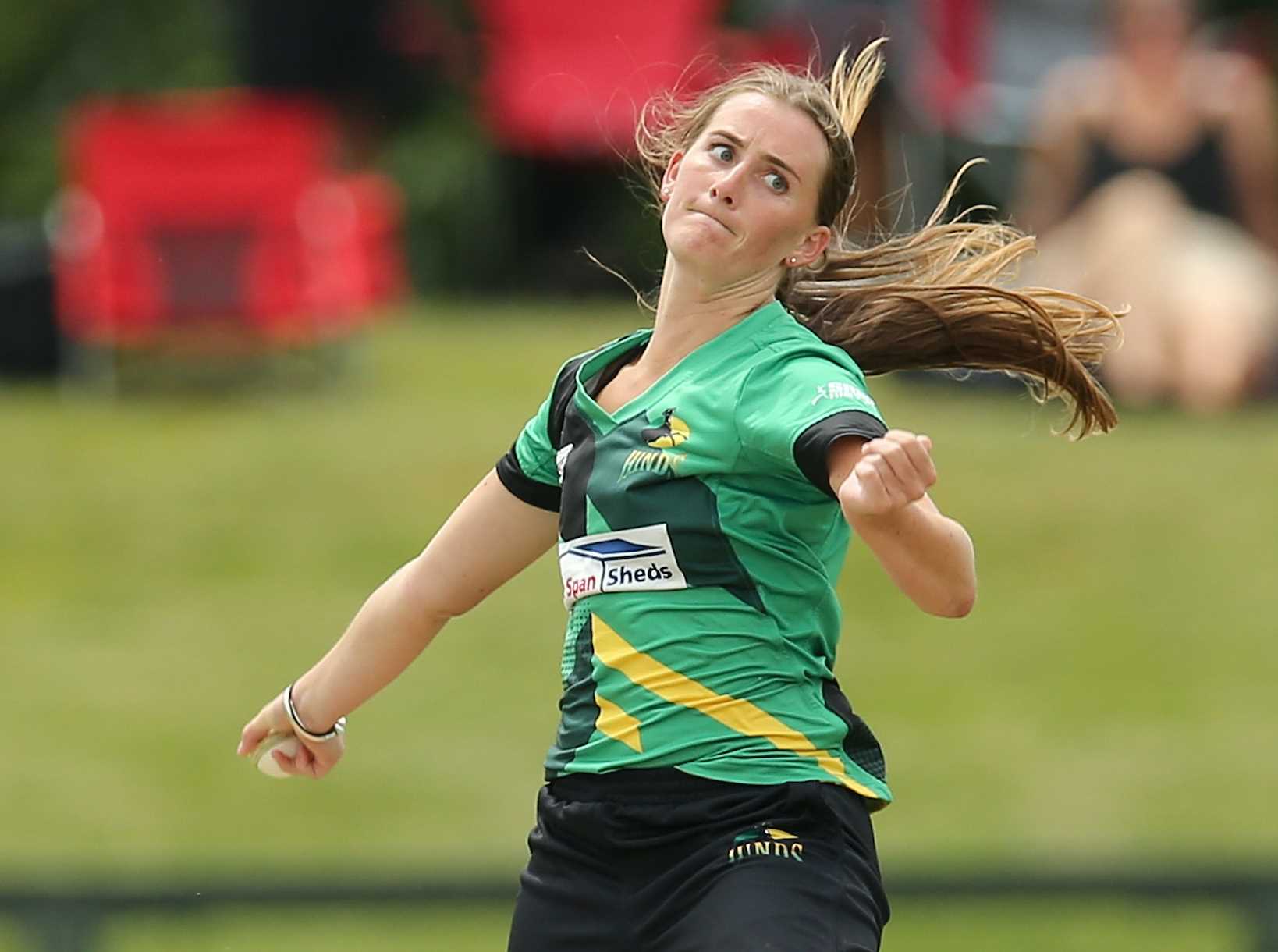 Rising star ROSEMARY MAIR’s summer of cricket is off to a sensational start.

Contracted to the WHITE FERNS for the first time this year and coming off a solid off season’s training, the Napier youngster rocked up with a double hat-trick — four wickets in four balls — in the first round of the 2019/20 Shrimpton Trophy at the weekend.

Hawke’s Bay batted first against Taranaki at at Whanganui’s Victoria Park to post a respectable 263 for nine.

The top order fired and put the runs on the tins after winning the toss in the 40-over match.

CENTRAL HINDS 40 NOT OUT! REGISTER NOW FOR CELEBRATIONS

Opener Margot Scoular top-scored with 55, the fellow Napier youngster pairing with Mair who blasted 33 off just 16 balls (2 x 4, 3 x 6) at first drop for her provincial side — a quick, damaging stand before Mair was run out by fellow Central Hind Kate Baxter.

Taranaki fought back with the ball but, with Flora Devonshire chipping in a handy 35 down the order, Hawke’s Bay would have been feeling confident at the break. Even so, a 207-run victory was the stuff of imagination — until Mair quickly demolished the Taranaki top order.

Mair made short work of that task, ensuring Taranaki was all out for just 56 — opener Emily Cunningham top-scoring with just 12.

Meanwhile, Cunningham had witnessed carnage at the other end as Mair started work on her game-changing second over by bowling opening partner Jess Hollard for one.

Mair then dismissed the next three batsmen for golden ducks with her next three balls, bowling Aimee Wisnewski, trapping Jordan Bolger for her hat-trick, and then bowling Kate Baxter for good measure in a rare quadruple wicket maiden.

The star seamer was unplayable, not even a single run scored off her four overs as she ended her stint with the remarkable stats of 4-4-0-4. 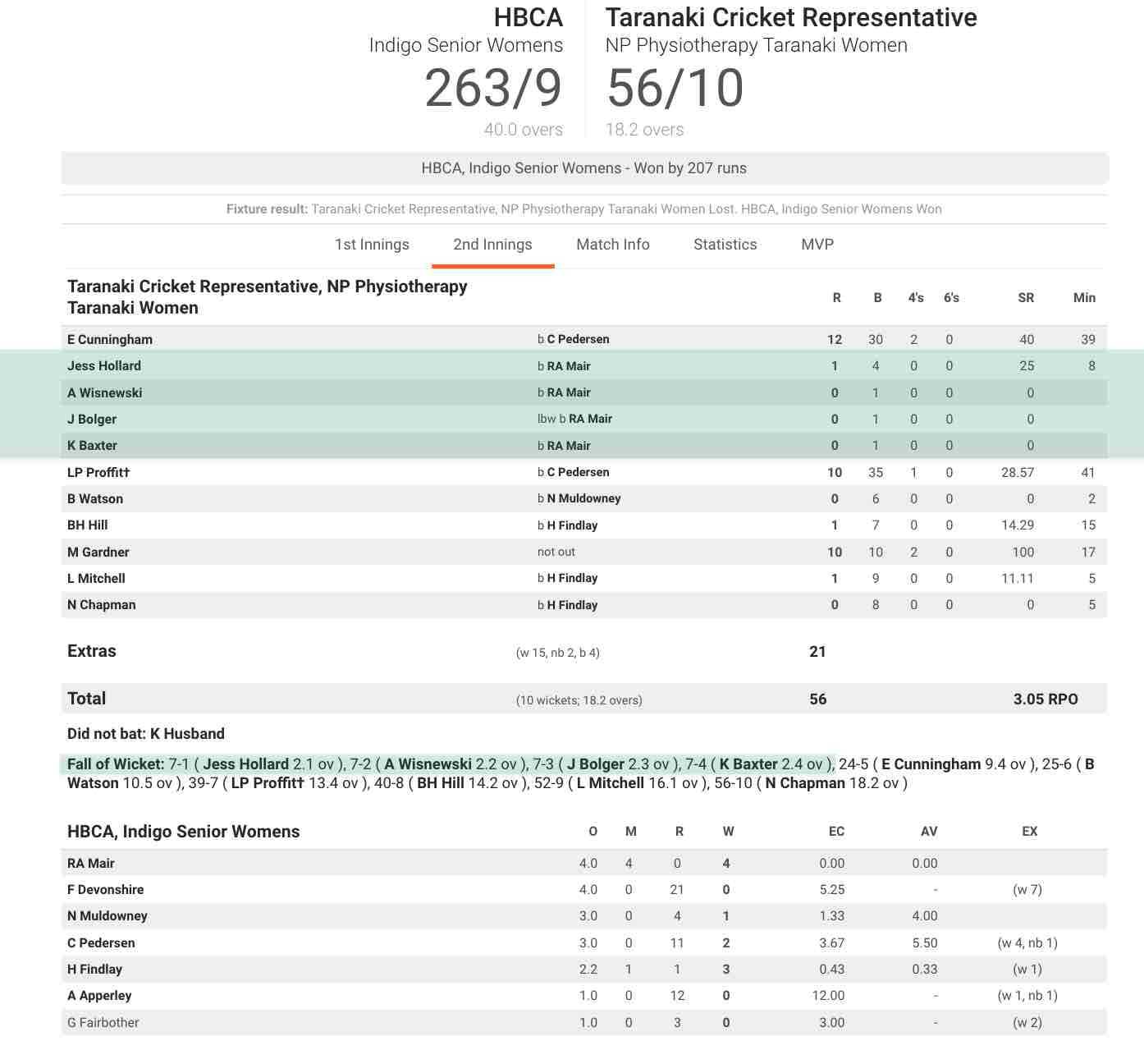 The pressure fell on Cunningham to steady the ship to launch a rescue bid and she held until the 10th over, but there was no coming back for Taranaki as Findlay mopped up with 3-1 off just two and a bit overs, while Cate Pedersen helped herself to 2-11 after dismissing Cunningham.

In the weekend’s other round-one match, also in Whanganui, Manawatu got off to a winning start after putting their hosts in at Victoria Park, while the Wairarapa Korus had the bye.

Jess Watkin took control for her side with 75 off 70 balls at first drop, but struggled for support.

After Mikaela Greig had the big wicket caught in the 26th over, Central Hinds veteran Esther Lanser took up the task with an unbeaten 42* at run-a-ball pace, but Wanganui couldn’t push past the 200-mark and were all out in the 39th over for 193.

Central Hinds allrounders Hannah Rowe (a tidy 3-28) and Greig (2-41) had led the way with the ball, then backed it up with the bat in the chase.

Their 147-run third-wicket stand proved the difference, Rowe (68 off 75) and Greig (an unbeaten 87* off 67 balls) looking in excellent touch ahead of the first two rounds of the Hinds’ Hallyburton Johnstone Shield defence, against the Otago Sparks in Levin next weekend.

The CD's senior women's inter-district competition is named after the late New Zealand and CD representative Mike Shrimpton.Shrimpton went on to become the first New Zealand coach to win an ICC Cricket World Cup when he guided the WHITE FERNS to the 2000 title, and was a beloved mentor to many of our current WHITE FERNS and Central Hinds, coaching the Hinds until passing away from cancer in 2015.